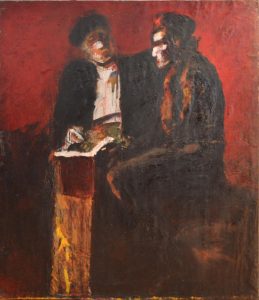 Gazelli Art House presents ‘The New Verge’, the first joint exhibition of Ashraf Murad and Farhad Khalilov, two of Azerbaijan’s most significant contemporary artists. Although the two artists are contemporaries, they have never been exhibited together, and ‘The New Verge’ aims to finally establish a multi-dimensional conversation between them. “At first glance, it might appear that Ashraf Murad and Farhad Khalilov are strikingly different. Indeed, both artists had their own separate paths, but ‘The New Verge’ is not merely a juxtaposition of two masters—these two outstanding Azeri artists are kindred spirits; one matches the other in power, depth, and relationship to the canvas itself. United by a political epoch, these artists managed to remain freethinkers, maintain their individuality and internal independence despite the framework of Soviet ideology.” – Farah Piriye (exhibition curator). Mila Askarova (gallery director) adds, “it’s really exciting to be able to show such important artists from Azerbaijan and give voice to the region’s history in the UK. In an uncertain geopolitical time we benefit from looking beyond the Eurocentric.” The show marks the beginning of a conversation that will be expanded upon in January 2021, as part of Gazelli Art House’s series of annual art historical exhibitions.