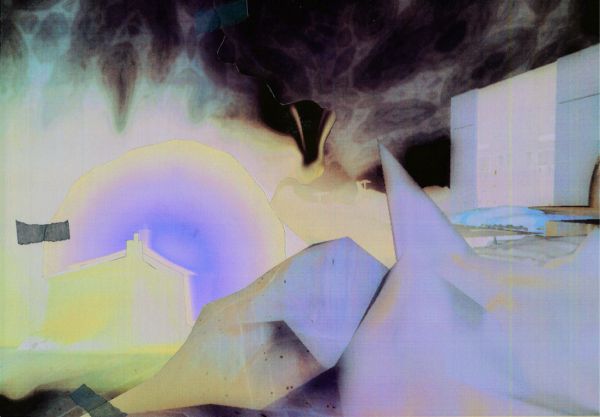 Dreams of a Witch House

Alison Gill is known primarily as a sculptor but drawing is an important element of her practice. She lives and works in London and has exhibited widely in Britain and internationally. Gill’s subjects often exist at the edge of consensual reality. Working with virtual reality technology is her latest enquiry into what can be imagined but usually remains unseen.

Using collage, Photoshop and screen-grabs from Experiments in a Virtual Double World, Dreams of a Witch House represents an eruption of the uncanny where real material security has been supplanted by some kind of spatial anxiety. With a nod to H.P.Lovecraft, the metaphoric bogeyman here materialises fear in the form of the architecture of a familiar domestic house surrounded by a ghostly aura and a geometric landscape.

By putting on the head-set and entering the world of virtual reality, which has been compared to hallucinogenic mind-altered states, some element of anxiety and excitement in the viewer is expected. Dreams of a Witch House points to these pleasures and dangers – it’s a new kind of experience and an immersive language in development.