Living and working in London, Colbert’s multi disciplinary approach, mixes art, clothing and performance to create a unique contemporary voice. He is known for his bold embroidery paintings and sculptures and for having created the world renowned art brand THE RODNIK BAND. Described by Andre Leon Talley as “the Godson of Andy Warhol”, Colbert has fans ranging from Lady Gaga Anna Wintour & Jeffrey Deitch.

Colbert is also known for his wearable artworks, such as his Urinal Dress, has exhibited in Fairs, Museum’s and galleries worldwide, such as: Miami Basil, the Van Gogh museum, and in the recent World Goes POP show at TATE Modern. Philip Colbert’s strong use of colour and abstraction of iconic imagery place his work within a engaging dialogue with the contemporary post pop art movement.

Like his Pop Art predecessors, he employs distilled compelling symbols of mass culture and re-contextualizes them in his life to create a provocative, multi disciplinary satirical language of his own. Colbert conceives the 1950s American kitchen aesthetic as the foundation of ‘Pop’ and layers it with his own playful response to important icons and symbols, such as meat imagery, prominent in the work of Soutine and Francis Bacon, and the iconic image of Fried eggs which Colbert describes as “mini Mondrian’s with punk humour”. In doing so, he creates a dialogue with established ideas and works of the past. He ironically pastiches this imagery, playing on the notion that their repetition and overuse over the years have rendered them ultimate icons of pop culture.

Philip Colbert on Art16: “I am excited to collaborate on creating a public installation for Art16. I wanted to create a “FRIED EGG WORLD”. I love this symbol, for me it is the ultimate marriage of Humour & aesthetics. They are the symbol of life! On one level they have the abstract aesthetic purity Peit Mondrain strived for, while on the other they captures the humour of the greasy English fry up. They communicate to people across all boundaries, for me they are a powerful symbol from everyday life.  I wanted to create large patterns of these against a mirrored surface. So when people look at the surface it appears they are in a FRIED EGG WORLD. For me Art is about creating a world of fantasy and escapism, so hopefully they will bring a touch of pop fantasy to Art16.” 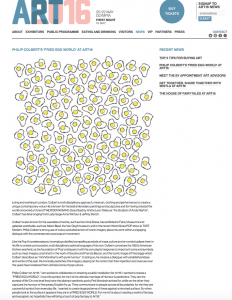 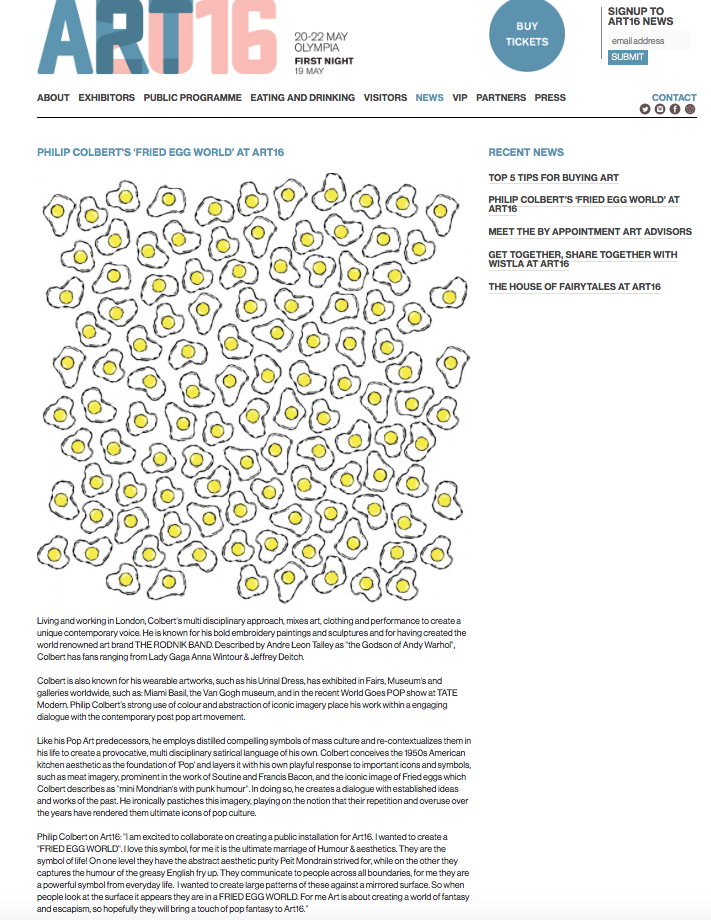