Art Center Hugo Voeten proudly presents Memoridermata, the new solo exhibition of Aron Demetz, which is on show from April 24 – June 30 2015. Several works of this Italian sculptor are included in the collection of Hugo Voeten. Therefore, to host Demetz’s new retrospective couldn’t remain from the future.

Aron Demetz primarily uses traditional woodcarving techniques to create life size sculptures. The process of working with wood is a fundamental part of Demetz’s aesthetic. Through his work, he explores the possibilities and limitations of the wood as a material and celebrates its textures and transformation by applying varying processes. The simplified abstracted human figures are for Demetz personifications of the wood itself. He sees the wood as entities that carry out their own soul. This, together with the depiction of the human figure in classical postures or unusual awkward positions, results in strong physical sculptures that convey both our uniformity with nature and our alienation from it. A lot of the artist’s works convey topics as injury, healing and metamorphosis. The large and impressive sculpture Memoridermata, playing a key role in this exhibition, is a beautiful example of these multilayered topics.

Demetz adopted a traditional South Tyrolean technique of woodcarving that dates back to the 17th century. The use of this technique results in expressive and poetic figures. But soon Demetz started applying other major techniques, like the use of fire and natural resin, the thick sap that comes out of the trunk’s wounds. He applies this resin, carefully collected from the trees in the Val Gardena, onto his works, over time resulting into a transparent amber. Smelling in a particular manner and characterized by a typical color and texture, the resin gives his wooden sculptures a more corporeal presence, emphasizing the vulnerability of the figures. His sculptures gain materiality as he pours the resin on the head and trunk of his figures. By using fire, which blackens everything, Demetz creates intense, torn figures. The fire is used in a symbolic way; it purifies the works and figures.

In later projects Demetz starts to reject manual actions, and explores the non-expressive neutrality of the computer, revealing alien, glacial figures. A different kind of sculpture emerges, abandoning the expressive, primitive cutting of wood to unveil a thick hatching spread on the entire surface. The wooden skin of his new figures show strange viral growths and mushrooms that come out of the body. In Memoridermata for example, the artist uses a milling process carried out by a computer. His use of this technique results in a beautiful smooth surface, but at other parts, wooden fibers grow out of the skin and limbs of his figures. This way he accents the alienating character of his figures.

Aron Demetz was born in Val Gardena in 1972, in northern Italy. He attended the Kunstschule Wolkenstein, he studied sculpture at the Akademie der Bildenden Künste in Nuremberg. From 2010-2013 he was professor of sculpture at the Accademia di Belle Arti in Carrara, Italy. Demetz rose to international prominence with his exhibition in the Italian pavilion at the 53th Venice Biennale. His notable solo exhibitions include PAC Milan, Italy and the Hans Arp Museum, Remagen, Germany. Demetz’s work is in important international collections including Museo Daetz-Centrum, Lichtenstein, Germany, Museo Trauttmansdorff, Merano, Italy, Museo Omero, Ancona, Italy en Museo Ladin San Martin De Tor, Bolzano Italy. 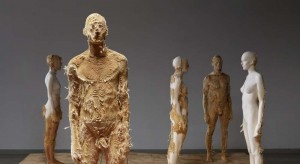 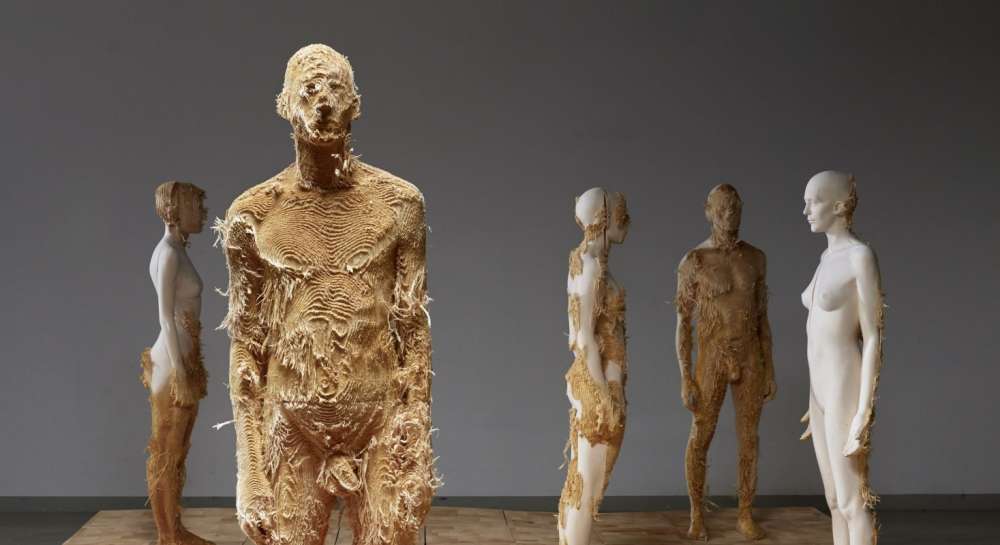